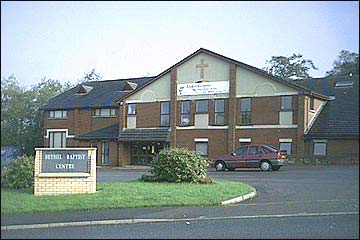 There have been Baptists in the area since the mid 1600s, however the area did not have a Baptist Church until Bethel Baptist Church, Pontyclun was founded by Charles Higton in 1876.

They initially met in the Pastor’s front room in School Street for a while. Very quickly it became too small and a builder who had just completed a contract for the railway offered to leave a shed for them. This was quickly fitted out for services

By the early 1880s Rev. Higton and the congregation saw need for a larger building. They found land along the main road and Mr John Cory a leading Christian businessman was approached, and kind agreed to lend money for the building. When he died the church was left free of debt in his will.

The Church continuede to grow and shortly after the second world war had its forst full time minister, Rev Idris Jones on a salary of £2 and 15 shillings per week!

Over the year the Church improved the building, however it closed in 1990 due to storm damage the church moved to a purpose built premises on Heol Miskin in 1993.

You can download a detailed history of the church here